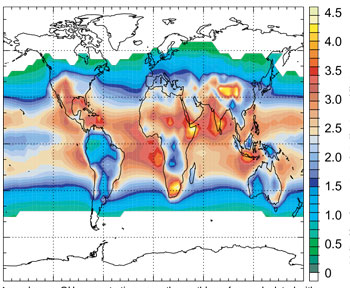 Explain how OH, the hydroxyl radical, works to cleanse the atmosphere of harmful trace gases.

What happens to the millions of tonnes of gases that nature and humankind lob into the atmosphere every year?

Fortunately, their rate of accumulation is countered by the atmosphere’s ability to cleanse itself of most of these so-called trace gases, especially those in chemically reduced form. Through chemical changes initiated by sunlight (photo-oxidation or photolysis), such trace gases are transformed into products that are more easily removed by rain and snow, or that deposit directly onto the earth’s surface.

Although it makes up about a fifth of our atmosphere, oxygen (O2) is not the main oxidant. Other molecules that are produced naturally in the atmosphere, including ozone (O3), the nitrate radical (NO3), and the hydroxyl radical (OH), are much more reactive, even if their atmospheric concentrations are low. Radicals are highly reactive because they have unpaired electrons which tend to transfer to other molecules.

The OH radical is the most important oxidant in the troposphere, the lowest part of the atmosphere (below about 10 km). Nobel Prize winner Paul Crutzen coined the phrase “detergent of the atmosphere” to describe this important cleansing role of OH. Most of the trace gases found in the troposphere are oxidised by OH into water-soluble products that are washed out by rain and snow. Specifically, OH is responsible for oxidising carbon monoxide (CO) and other carbon-based molecules, such as methane (CH4).

We can follow the creation of OH and how it acts to cleanse the atmosphere through a series of chemical reactions. OH is formed in the atmosphere when ultraviolet light (UV) from the sun strikes ozone in the presence of water vapour (H2O).

The initial reaction involves the photolysis of O3 by solar radiation.

These reactions show why a small amount of ozone is essential in the troposphere: it’s the ultimate source of the OH detergent. OH concentrations show strong seasonal and day/night cycles because OH creation is triggered by UV. Furthermore, because the creation of OH requires water vapour, the concentration of OH tends to decrease with increasing altitude (due to decreasing humidity). Atmospheric OH concentrations are highest in the tropics, where the solar radiation is intense and the humidity is high.

Measuring OH in the atmosphere

The high reactivity of OH is associated with a very short lifetime – about a second. This makes OH concentrations highly variable in time and space; the concentrations depend on environmental conditions such as cloudiness and humidity, the intensity of incoming solar radiation, and the presence of urban or natural pollutants.

In principle, local concentrations of OH can be measured directly, for example through laser-induced fluorescence. However, with OH production rate so variable and its lifetime so short, it’s difficult to measure the self-cleansing capacity of the global – or even regional – atmosphere. Nevertheless, tracking the long-term behaviour of OH concentrations at a global scale is critical to understanding the future of this self-cleansing capacity, and has become a major research goal.

Such tracking is indirect, usually based on monitoring atmospheric chemicals whose sources are well established and for which OH-initiated oxidation is believed to be the dominant ‘sink’, or removal mechanism. One indirect method of tracking OH involves long-term monitoring of the trace gas methyl chloroform (a solvent now banned by the Montreal Protocol), which is entirely man-made and mainly removed from the atmosphere by OH. From this monitoring – and from modelling – scientists have inferred global daytime OH concentrations between 100 thousand and 20 million hydroxyl radicals per cm3. At sea level pressure, this is equivalent to between 0.01 and 1 ppt (parts per trillion).

In the atmosphere, OH radicals are also regenerated during the various reactions, so very little is used up overall. We can look at the reactions initiated by OH as a set of chain reactions involving OH production, trace gas oxidation, and OH recycling. If a trace gas contains hydrogen atoms (such as hydrocarbons), OH reacts by taking one hydrogen atom. For example, OH reacts with methane (CH4), the simplest hydrocarbon, to produce water and a methyl radical (CH3).

The methyl radical reacts rapidly with oxygen to form the methylperoxy radical (CH3O2). From here, parallel chains
of reactions form the more stable formaldehyde molecule (HCHO), which has a lifetime of about 5–8 hours in sunlight.

The relative importance of different methane oxidation chains is determined by the level of pollutants. The most notable of these is nitric oxide (NO), particularly in urban areas. In an NO-rich environment, the oxidation chain produces excess ozone at levels that can be hazardous to human health. Formaldehyde is directly oxidised through UV light and via OH to carbon monoxide (CO), regenerating OH in the process. Indeed, methane oxidation is the dominant source of CO in the pristine atmosphere, bolstered by incomplete combustion of biomass and fossil fuels, especially in the northern hemisphere.

Carbon monoxide, whether it comes from methane or is independently emitted, is the major reactant with OH, accounting for about 75% of OH destruction, with most of the remainder destroyed by CH4 oxidation.

On average, a carbon monoxide molecule remains in the atmosphere for about 3 months before it’s attacked by OH, while CH4 persists for about a decade. The OH radical formed from photo-oxidation is of pivotal importance in oxidising both CH4 (to CO) and CO itself, as well as other natural and man-made pollutants.

What OH can’t do

Only a few tropospheric gases escape oxidation by OH. One example is the man-made chlorofluorocarbons (CFCs), which have no known sinks in the troposphere and therefore can reach the stratosphere, where they trigger the destruction of the ozone layer. The CFC substitutes we use today contain hydrogen atoms to make them susceptible to attack by tropospheric OH.

It’s little short of miraculous that despite the major role OH plays in disarming pollutants – and thus cleansing the atmosphere – average global levels of OH seem to have changed little over recent decades. Nevertheless, we pollute our atmosphere at our peril. Unexpected consequences could arise if a pollutant gas cannot be removed by our atmosphere’s pervasive detergent, or if it significantly depletes that detergent’s concentration.

Environmental Science Published for Everybody Round the Earth webpage: www.atmosphere.mpg.de/enid/24y.html

Posted in Science
← Study on the Effect of a MySpace Hydroxyl Generator on a Staphylococcus Aureus infection.