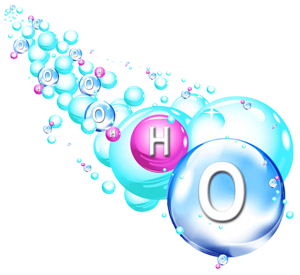 Although it may be difficult to visualize how hydroxyl radicals can totally decompose volatile organic compounds (VOCs) throughout the treatment space, it is a process that is very well understood and documented in over 25 years of chemical literature. (1‐5) The decomposition of volatile organic and inorganic compounds by hydroxyl radicals involves a complex series of free radical oxidation steps that gradually result in the loss of individual carbon atoms to eventually form carbon dioxide (CO2). HGI, the globe manufacturer of HQAir® technology, describes this process for simplicity as the “cascade” effect.

The process is very complex but continues to completion because the reactions involved are highly favoured thermodynamically and kinetically. This means that substantial energy is released when hydroxyl radicals gain an electron. Nature favours reactions that result in lower energy states. It also means that the rates of reactions of hydroxyls with VOCs are very fast; a characteristic essential to efficiency. If the kinetics is not favorauble, reactions are just too slow to be useful. You need both factors in your favour for an efficient sanitizing system. (3)

The hydroxyl radical is one of the most powerful oxidants found in nature, surpassed only by atomic fluorine in its oxidation potential. As an efficient oxidant, hydroxyls are driven to regain one electron to restore their very stable valence configuration. The most facile way to accomplish this in an environment rich in VOCs is to abstract a hydrogen atom with its single electron, leaving behind an organic free radical. Hydroxyls are such oxidants that they accomplish this within 22‐44 milliseconds.

The newly formed organic free radical has an unpaired electron that is initially localized on the carbon atom.

This moiety rapidly reacts with ambient oxygen to form a peroxy free radical in which the free electron is now localized on an oxygen atom.

Oxy radicals are powerful oxidants and even more stable than their peroxy counterparts, and therefore are able to travel even further throughout the treatment space to react with microorganisms and other VOCs. Other down‐stream oxidants are even more stable.

Hydroxyl radicals are also generated throughout the treatment space by continued reactions of intermediate compounds. For example, peroxy compounds decompose to form hydroxyls. Ozone is formed inside the chamber during photolysis, but the HQAir® technology is designed so that only small amounts of ozone exit the machine. This ozone is quickly decomposed in the treatment space and is another component of the many complex chemical reactions that occur. In fact, hydroxyls are known to eliminate ozone and the ozone can help create even more hydroxyls. Hydroxyls and these types of intermediate oxidants are the means by which HQAir® systems are able to penetrate and treat structures and contents at a distance from the device.

HGI describes this ongoing free radical chain reaction sequence and the formation of a series of intermediate oxidants as the cascade effect to enable non‐scientists to visualize the complex chemistry. The free radical transfer reactions essentially ‘unzip’ carbon chains rapidly. As long as hydroxyls are continuously formed, both thermodynamic and kinetic factors favour continued oxidation of VOCs. Hydroxyls have a very high oxidation potential and high reaction rates with most VOCs; characteristics that are well documented in the chemical literature.(1‐4) In the cascade effect, successive generations of oxidants continue to decompose and dissociate VOC carbon chains. This is driven by the nature of the oxidation process, which introduces oxygen into the carbon chains. In oxygenated VOCs, the hydrogen atoms near the oxygen atoms are much more reactive because of polarization. Oxygen attracts electrons away from less electronegative atoms and makes them more reactive. As such, hydroxyls next to carbon bearing oxygen(s) are more readily abstracted by another hydroxyl…and so on until that carbon atom is cleaved from the chain as stable CO2.

HGI® systems were designed to be innately safe by replicating nature’s sanitizing process. They do this by using the same range of UV radiation to generate the same chemicals in the same concentrations when they are distributed around the treatment space. The rate of formation of hydroxyls and decomposition of VOCs within the photolysis chamber is high since the chemicals that are formed within the chamber are effectively diluted throughout the treatment space. All of the chemicals generated in the HQAir® chamber as part of the cascade effect are also generated in nature. The HQAir® system replicates the constant cleansing action of the sun by injecting hydroxyls into the treatment space. This is how the system effectively imitates what happens in nature.

The overall concentrations of by‐products produced by HQAir® systems and in nature are in the low parts‐per‐billion (ppb) range. We have evolved to tolerate low concentrations of these chemicals because we are surrounded by them every day. Understandably, Occupational Safety & Health Administration (OSHA) and other regulatory agencies are concerned about high levels of chemicals in the environment. Most any chemical in high concentrations would be toxic. The Lovelace Respiratory Research Institute (LRRI) and Columbia Labs studies, along with a very significant number of field experiences, have confirmed that the HQAir® systems safely and effectively reduce ambient odour and VOC concentrations indoors.

HGI did not need to repeat these extensive chemical studies to validate the way by which its HQAir® systems are both safe and effective. What HGI chose to do was conduct definitive, third party studies to prove that it produces sufficient concentrations of free atmospheric hydroxyl radicals to be able to react with mid to high parts per billion levels of VOCs; concentrations that are typically found in remediation environments and other similar situations. HGI has done so in its studies with LRRI, the results of which have been further validated by independent analysis by Dr. David Crosley, a physical chemist well known for his years of studies and publications on atmospheric hydroxyl chemistry. The analytical methods used to do these studies involved very sophisticated methods and test chambers designed specifically to study hydroxyls as well as the industry’s most sensitive analytical equipment (gas chromatograph‐mass spectrometers sensitive to concentrations of a few parts per billion).

These studies verify that HQAir® systems generate optimal levels of free hydroxyl radicals that result in concentrations of hydroxyls and other oxidants throughout the treatment space that correspond to those found in nature. They also further verify that HQAir® hydroxyls rapidly react with VOCs reducing their concentration throughout the treatment space at rates of reaction that match those published in the literature; a definitive result for the confirmation that hydroxyls are the reactive species.

Posted in Product info, Science
← Safety of long-term exposure to hydroxyl radicalsStudy on the Effect of a MySpace Hydroxyl Generator on a Staphylococcus Aureus infection. →